As parishioners of Our Lady of the Lake and as members of the Body of Christ, we will seek to love God with all our hearts, souls and minds, through the liturgy and Tradition of our Church, through fellowship with each other and through communal and individual prayer. Out of this love for God we will seek to love others by searching out and responding to the spiritual, emotional and material needs of the members of our Parish and the community at large. We will offer a warm welcome to every parishioner. We will encourage each member to share his or her God-given gifts and talents with the rest of our Parish family.

Rev. Luke M. Studer O.M.C., the first Pastor of Our Lady of the Lake Parish 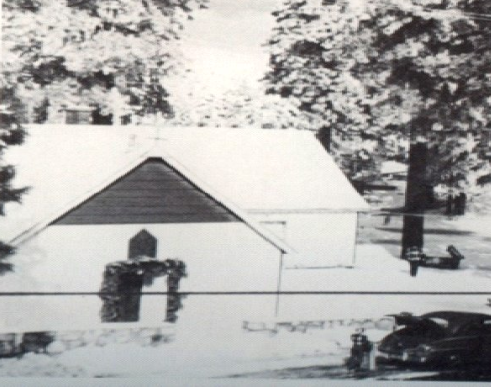 The outside view of the original Lake Arrowhead Mission Church.

Until 1939 the few Catholic families in Lake Arrowhead were served by visiting priests on irregular schedules. From 1926 to 1939 these families would meet to celebrate mass in a top floor classroom of the old school house, which is now fire station #1 located on Hwy 173 near the entrance to the village. As the natural beauty of the area attracted more people as permanent and part-time residents, the need for a permanent location was filled by leasing a small wooden structure that had been used as a boy scout lodge and a restaurant called the Larriet Café. The structure was located in Meadowbrook Woods, later to become known as Crest Park and is now considered part of Lake Arrowhead. The property was later purchased and remodeled, and in 1939 the little wooden structure in Crest Park was named Our Lady of the Lake Church. It did not have a resident pastor at that time and was served by various priests assigned by the Bishop to celebrate Mass on Sundays only.

Father Michael O’Duignan was assigned pastor on November 16, 1945, he was also a sickly man and had spent many months in a hospital in Denver for lung trouble. The parishioners told Fr. O’Duignan of Fr. Luke’s dream and what he had hoped to accomplish. A year passed and Fr. O’Duignan’s health improved. He too learned to love the rustic church. Although the church itself was more than adequate for the long winter months, the summer was difficult because the crowds were extremely large. Many attendees were known to faint because of the heat. Slowly an idea began to take form: An outdoor shrine and altar for the summer months seemed a logical answer. Fr. Mike dedicated himself to fulfilling the dream of Father Luke and to building a shrine to Our Lady. In August of 1948, plans were announced to build an outdoor shrine to Our Lady of Fatima. Big plans for the little wooden church would also be in the future.

Fathers James Anderson, Ray O’Donohoe, William Clavin and Patrick Linneman all served as pastors from 1952 until 1969. It was then time to enlarge the church from the small wooden structure that accommodated about 300 people to the large church we now see. In 1969 Father William Savord set about to complete this monumental task. He walked the mountain to raise funds, carrying a scale model of what the new church was to look like, but Fr. Savord was transferred to another parish before the rebuilding could begin. It was then left to Msgr. Tullio Andreatta, who saw to the completion of the remodeled church. Father Andreatta turned down 3 bids which were beyond financial capabilities, and then he came in contact with Mr. Lee Chereskoff, who not only was in line with financial resources but provided daily direction over the project. Good fortune continued as Architect Mr. Vernon Johnson of Lake Arrowhead, Structural Engineer William T. Altmeyer of Lake Arrowhead, and Mechanical Engineer Stan Solot of Crestline became the nationally awarded design team that built the new church.

Our Lady of the Lake Church was built in the shape of a cross and the laminated arches in the church were designed to resemble a nun’s habit. At midnight mass on Christmas Eve 1973, with no heat, windows, or furniture, and standing on cement floors, 700 people celebrated the first mass in the new church. The first official mass was celebrated on St. Joseph’s Day, March 19, 1974 and the new church was dedicated on June 30, 1974. Msgr. Andreatta left the parish in 1980 and was followed by pastors Joe Stadler, Geno Spino, John Harmon, Ivan Fitzwilliam and Bob Erickson.

In August 1993, Fr. Bob Erickson commemorated the fiftieth anniversary of Our Lady of the Lake Church. Thanks to Walter and Dorothy Brule, a video of the milestones of our parish community was compiled from donated pictures and old films that had been stored in the church archives. The video was presented by Ross and Charmaine Johnstone, who at that time had been parishioners for 45 of the 50 year history of our church. The video was a highlight of the celebration.

Through the years Our Lady of the Lake Church has needed many improvements and upgrades. Because of the dedication and hard work from our past and present pastors and with contributions and support from both parishioners and friends of our church, numerous improvements have been realized. In 1987, the addition of the Children’s Chapel was accomplished thru the support of the Fatima Shrine Guild. In 1996 the upper room of the church was completed under the direction of Fr.Bob Erickson and is now used for the children’s liturgy and other ministry meetings. Support for many projects has come from unexpected places. Windows that were once in the chapel of our now Mountains Community Hospital, which was originally operated by the Sisters of St. Joseph of Orange, were ruined during a remodeling and painting project at the hospital. The sisters, who also taught religious education at Our Lady of the Lake, gave the windows to local stain glass artist, Kay Fulton. She, in turn, gifted them to one of her students, Charmaine Johnstone, an original member of Our Lady of Fatima Shrine Guild. Charmaine cleaned and removed paint from the damaged glass and for ten years the windows sat in the Johnstons’ garage.

Father Tim Keppel, C.R. came to our parish in 1997. With the continuing spirit of improvement, akin to our past pastors, Fr. Tim, with the ever-present support of our parishioners and friends, began to make more improvements to the church. When it was made known that new doors in the church would be a project, Mrs. Charmaine Johnstone and Kay Fulton took to the task of completing the restoration of the chapel windows. They donated the windows in 1998 and Mr. Pat Brennan installed them. Other improvements to our church have included new landscaping, underground sprinkler systems, new lighting in the church and  a new sound system. In 2005, new carpet, new pews and individual seating were added to the church, making room for handicapped access.

In July 2009, Fr. Leonard Krzywda, C.R., became our pastor and continues the spirit of improvement and the spiritual guidence to our parishioners. Most recently, in 2014, new heating and air conditioning units were installed in both the Church and the Parish Hall. Our Lady of the Lake Church was founded on love, hard work and dedication, a Parish Community erected to the greater honor and glory of God.